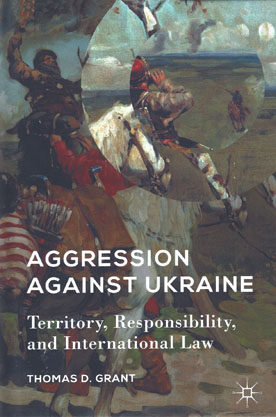 Aggression against Ukraine in 2014 marks a stunning shift. Ever since 1945 it had been understood that the borders of States must not be the object of forcible change by other States.

Now, however, Russia has revived long-buried historical claims-and prosecutes them by dint of arms. The annexation of Crimea in March 2014 and the subsequent armed incursions in eastern Ukraine under color of separatist movements in Donetsk and Luhansk challenge not just one State's territorial integrity.

Russia's domestic rejection of human rights and its new geopolitics of territorial seizure in this light should be seen not in isolation but as connected developments-and as a challenge to international law and global public order at large.

Contents:
PART I: AGGRESSION AGAINST UKRAINE
1. 'Glory and Outstanding Valour' The Seizure of Crimea
2. Crimea and the Use of Force
3. Non-Recognition
PART II: THE TERRITORIAL SETTLEMENT AND INTERNATIONAL LAW
4. The Privileged Character of Boundaries and Territorial Regimes
5. Boundaries, Territory and the Obligation Not to Recognize the Unlawful Situation
6. Use of Force and Other Values
7. Boundaries, Territory and Human Rights
PART III: DOMESTIC ORDER, INTERNATIONAL ORDER AND MECHANISMS FOR CHANGE
8. The West's Interventions and Russia's Argument Conclusion