China's Policy towards the South China Sea: When Geopolitics Meets the Law of the Sea 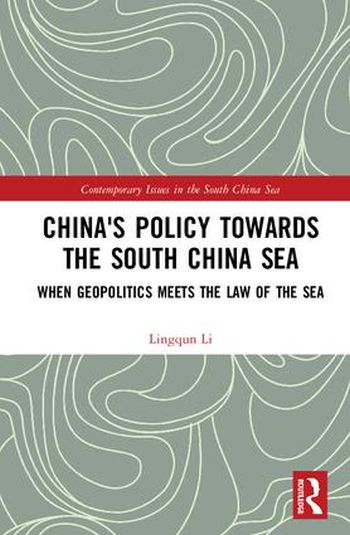 This book provides an explanation of Chinese policy towards the South China Sea, and argues that this has been sculpted by the changing dynamics of the law of the sea in conjunction with regional geopolitical flux.

The past few decades have witnessed a bifurcated trend in China’s management of territorial disputes. Over the years, while China gradually calmed and settled most land-border disputes with its neighbors, disputes on the ocean frontier continued to simmer in a seething cauldron. China's Policy towards the South China Sea attributes the distinctive path of China’s approach to maritime disputes to a unique factor – the law of the sea (LOS) as the "rules of the road" in the ocean. By deconstructing the concept of "sovereignty" and treating the LOS as an evolving regime, the book examines how the changing dynamics of the LOS regime have complicated and reshaped the nature and content of sovereign disputes in the ocean regime as well as the options of settlement. Applying the findings to the South China Sea case, the author traces the learning curve on which China has embarked to comprehend the complexity of the dispute accordingly and finds that it is the dynamic interaction of the law of the sea regime and the geopolitical conditions that has driven the evolution of China’s South China Sea policy.

Contents:
Introduction
Chapter One: The Law of the Sea regime and the transformation of sovereign disputes in the South China Sea
Chapter Two: The pre-1971 period: the PRC’s initial claims in the SCS and its view of international regimes
Chapter Three: China in the UNCLOS III era: where changes began
Chapter Four: The 1980s: shaping a new game in the SCS
Chapter Five: A multilateral turn in the SCS: 1990-2002
Chapter Six: The 2002-2013 period : changes and continuities
Chapter Seven: The South China Sea Arbitration case and beyond
Chapter Eight: Conclusion