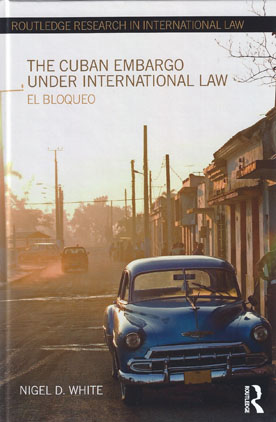 It considers the extent to which the US authorities have enforced the embargo's letter of the law, the impact on Cuba and an evaluation of the Cuban response to the embargo. The Cuban embargo will be examined alongside other major disruptive conflicts of the 20th and 21st centuries, including the Cuban Missile Crisis; sanctions against Rhodesia; the Arab Oil Embargo; sanctions against and the invasion of Iraq; sanctions against Burma, Iran and North Korea.

Through an analysis of these conflicts it traces the development of non-forcible reprisals, sanctions, counter-measures and embargoes in history and specifically as a means of enforcement of international law.

The book asks crucial questions about the importance and function of international law in the modern era, including its very existence. Nigel White argues that the illegality of the embargo and the fact it has not been curbed or even fully confronted by the rest of the world has resulted in a fifty-year toleration of what appears to be a serious violation of international law which has made it very difficult to identify when sanctions are lawful or not.

The book offers a valuable reference point for scholars, experts and interested parties seeking understand this long-running dispute; but will also appeal more widely to those interested in the functioning and future of international law and international relations.