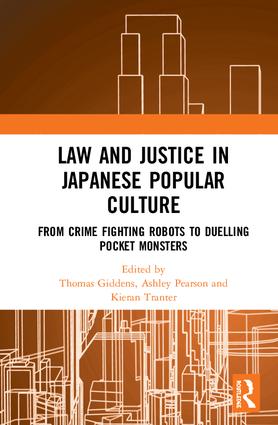 In a world of globalised media, Japanese popular culture has become a significant fountainhead for images, narrative, artefacts, and identity. From Pikachu, to instantly identifiable manga memes, to the darkness of adult anime, and the hyper-consumerism of product tie-ins, Japan has bequeathed to a globalised world a rich variety of ways to imagine, communicate, and interrogate tradition and change, the self, and the technological future. Within these foci, questions of law have often not been far from the surface: the crime and justice of Astro Boy; the property and contract of Pokémon; the ecological justice of Nausicaä; Shinto’s focus on order and balance; and the anxieties of origins in J-horror.

This volume brings together a range of global scholars to reflect on and critically engage with the place of law and justice in Japan’s popular cultural legacy. It explores not only the global impact of this legacy, but what the images, games, narratives, and artefacts that comprise it reveal about law, humanity, justice, and authority in the twenty-first century.

Contents:
Preface
List of Figures
List of contributors
Crime Fighting Robots and Duelling Pocket Monsters: Law and Justice in Japanese Popular Culture
Ashley Pearson, Thom Giddens and Kieran Tranter
Possibilities of Justice
The Symptoms of the Just: Psycho-Pass, Judg(e)ment, and the Asymptomatic Commons
Daniel Hourigan
Pirates, Giants and the State: Legal Authority in Manga and Anime
James C Fisher
Traumatic Origins in Hart and Ringu
Penny Crofts and Honni van Rijswijk
Justice in the Sea of Corruption: Nausicaä as Ecological Jurisprudence
Thomas Giddens
Masterful Trainers and Villainous Liberators: Law and justice in Pokémon Black and White
Dale Mitchell
The Legal Subject
Doing Right in the World with 100,000 Horsepower: Osamu Tezuka's Tetsuwan Atomu (Astro Boy), Essence, Posthumanity and Techno-humanism
Kieran Tranter
Caught in Couture: Regulating Clothing and the Body in Kill la Kill
Rosie Taylor-Harding
Holy Trans-Jurisdictional Representations of Justice, Batman!": Globalisation, Persona and Mask in Kuwata’s Batmanga and Morrison’s Batman, Incorporated
Tim Peters
The Power and Problem of the Image
‘Finding the Law’ through Creating and Consuming Gay Manga in Japan: From Heteronormativity to Queer Activism
Thomas Baudinette
Regulating Counterpublics in Yaoi Online Fan Communities
Scott Beattie
‘Is Yaoi Illegal?!’: Let’s Get Real about the Potential Criminalisation of Yaoi
Hadeel Al-Alosi
Constitutional Analysis of Secondary Works in Japan: From Otaku to the World
Yuichiro Tsuji
Specificities of Law and Justice in Everyday Japan
‘The World is Rotten’: Execution and Power in Death Note and the Japanese Capital Punishment System
Ashley Pearson
Debts, Family, and Identity after the Collapse of the Bubble: Miyabe Miyuki’s All She Was Worth
Giorgio Fabio Colombo
Rules and Unruliness in Manga Depictions of Community Police Boxes
Richard Powell and Hideyuki Kumaki
The Image-Characters of Criminal Justice in Tokyo
Peter D Rush and Alison Young
Index