Immigration in the 21st Century: The Comparative Politics of Immigration Policy 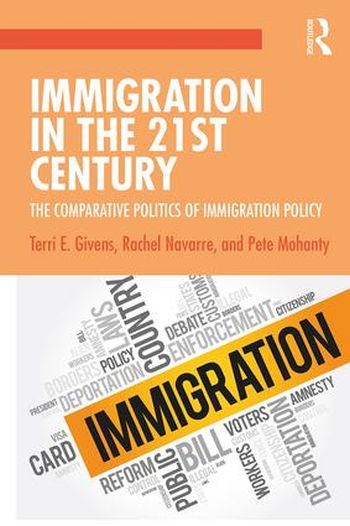 Immigration policy is one of the most contentious issues facing policy makers in the twenty-first century. Immigration in the Twenty-First Century provides students with an in-depth introduction to the politics that have led to the development of different approaches over time to immigration policy in North America, Europe, and Australia. The authors draw on the work of the most respected researchers in the field of immigration politics as well as providing insights from their own research.

The book begins by giving students an overview of the theoretical approaches used by political scientists and other social scientists to analyze immigration politics, as well as providing historical background to the policies that are affecting electoral politics. A comparative politics approach is used to develop the context that explains the ways that immigration has affected politics and how politics has affected immigration policy in migrant-receiving countries. Topics such as party politics, labor migration, and citizenship are examined to provide a broad basis for understanding policy changes over time.

Immigration remains a contentious issue, not only in American politics, but around the globe. The authors describe the way that immigrants are integrated, their ability to become citizens, and their role in democratic politics. This broad-ranging yet concise book allows students to gain a better understanding of the complexities of immigration politics and the political forces defining policy today.