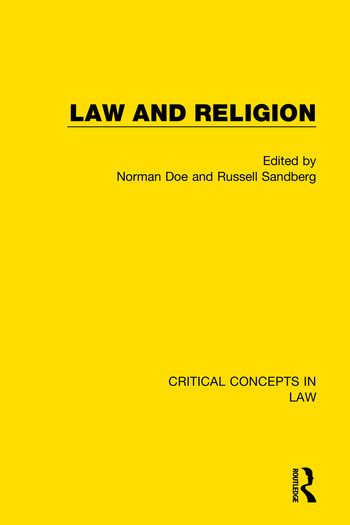 From the murderous reaction to the publication in a French satirical magazine of ‘blasphemous’ cartoons, to wrangles over the wearing of religious dress and symbols in schools and workplaces, the interaction between law and religion is rarely far from the headlines. Indeed, the editors of this Routledge collection argue that, since the events of 11 September 2001, the short- and long-term implications of multiculturalism, religious resurgence, and extremism have dominated public life both globally and domestically. Consequently, they say, the legal framework concerning the regulation of religion has changed dramatically over the last decade or so. There have been numerous developments at the global, regional, state, and sub-state level, and these changes have been accompanied by an unprecedented number of high-profile cases affecting religious individuals and groups.

Now, this new collection from Routledge’s Critical Concepts in Law series, edited by two prolific authors based at the world-leading Centre for Law and Religion at Cardiff University, meets the need for an authoritative reference work to help researchers and students navigate and make better sense of an abundance of scholarship.

With a full index, and thoughtful introductions, newly written by the learned editors, Law and Religion traces the field’s development and highlights the challenges for future explorations. The collection will be valued by legal and religious scholars as a vital and enduring resource.