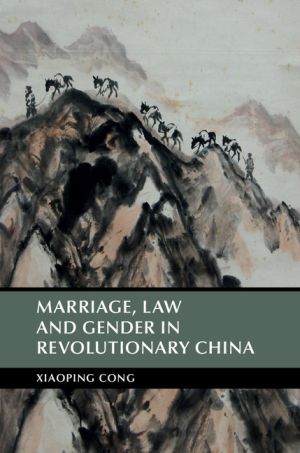 By investigating how a 1943 legal dispute over an arranged marriage in a Chinese village became a legal and political exemplar as well as a series of cultural products presented on the national stage, this book examines the social and cultural significance of Chinese revolutionary legal practice in the construction of marriage and gender relations.

The book seeks a conceptual breakthrough in revisiting the Chinese revolution and its impact on women and society by presenting a Chinese experience that cannot and should not be theorized in the framework of Western discourse. The book takes a cultural historical perspective on how the Chinese revolution and its legal practices produced new discourses, neologisms and cultural symbols that contained China's experience in twentieth-century social movements. It shows how revolutionary practice was sublimated into the concept, 'zizhu' or 'self-determination', an idea that bridged local experiences of revolution and the influence of the world.

Contents:
Introduction
Part I. Locality, Marriage Practice and Women:
1. The case of Feng v. Zhang: marriage reform in a revolutionary region
2. The appeal: women, love, marriage, and the revolutionary state
Part II. Legal Practice and New Principle:
3. The new adjudication: the judicial construction in marriage reform
4. A new principle in the making: from 'freedom' to 'self-determination' of marriage through legal practice
Part III. Politics and Gender in Construction:
5. Newspaper reports: casting a new democracy in village communities
6. The Qin opera and the ballad: from rebellious daughters to social mothers
7. The Ping opera and movie: nationalizing the new marriage practice and politicizing the state-family, 1949-1960
Epilogue: 'Liu Qiao'er', law, and zi-zhu: beyond 1960
Bibliography
Index.