This book is now Out of Print.
A new edition has been published, the details can be seen here:
Reece & Ryan: The Law and Practice of Shareholders' Agreements 5th ed isbn 9781474317276

The Law and Practice of Shareholders' Agreements 4th ed 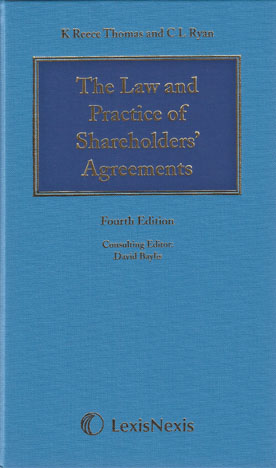 
A shareholder agreement is one of the most important documents a privately owned company can have. They provide a method for:

Newly formed companies often do not worry about having an agreement. Optimism is high and everyone is getting along well. It is only as the company grows and matures that problems can begin. Interpersonal difficulties, life changes (death, divorce), financial difficulties (especially the threat of insolvency) can all be mitigated with a shareholders agreement which deals in advance with that scenario.

This popular, fully-updated title explains the law on shareholders agreements in a clear and comprehensible style. It guides the reader through a typical transaction, highlighting the commercial issues facing the client and ultimately the solicitor as draftsman. It examines how a shareholders agreement can be unravelled in the event of insolvency or other reason for termination.