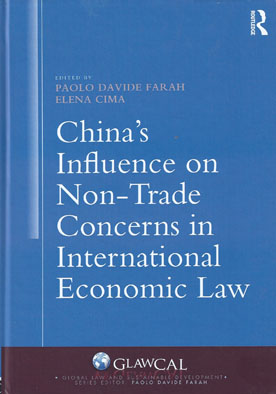 Focusing on China, the book shows the current trends of Chinese law and policy towards international standards. The authors argue that China can play a leading role in this context: not only has China adopted several reforms and new regulations to address NTCs; but it has started to play a very relevant role in international negotiations on NTCs such as climate change, energy and culture, among others.

While China is still considered a developing country, in particular from the non-trade concerns point of view, it promises to be a key actor in international law in general, and, more specifically, in international economic law in this respect.

This volume assesses, taking into consideration its special context, China's behaviour internally and externally to understand its role and influence in shaping NTCs in the context of International Economic Law.

Contents:
1. Introduction
2. The Development of Global Justice and Sustainable Development Principles in the WTO Multilateral Trading System and in the GSP+ through the Lens of Non-Trade Concerns
3. Economic Globalization and Social Rights: the Role of the International Labor Organization and the WTO
4. Multinational Corporations and Corporate Social Responsibility in a Chinese Context: An International Law Perspective
5.Rights Interest Litigation, Socio-Economic Rights and Chinese Labor Law Reform
6. Law, Culture, and the Politics of Chinese Outward Foreign Investment
7. Chinese Investment in Africa: Strengthening the Balance Sheet
8. Soft, Complex and Fragmented International Climate Change Practice: What Implications for International Trade Law?
9. The Principle of Common but Differentiated Responsibilities in the International Regime of Climate Change
10. The Kyoto Protocol: Carbon Pricing and Trade Prospects. The Clean Development Mechanism from the Perspective of the Developing Countries
11. The Role of Domestic Policies in Fostering Technology Transfer: Evidence from China
12. China's Environnental Legislation and Its Trend Towards Scientific Development
13. Research on the Reform of the Judicial Relief System for Environmental Disputes in China
14. The Impact of the Kyoto Protocol and UNFCCC on Chinese Law and the Consequential Reforms to Fight Climate Change
15. The Development of NGOs in China: A Case Study on Their Involvement with Climate Change
16. A Comparison Between Shale Gas in China and Unconventional Fuel Development in the United States: Health, Water and Environmental Risks
17. Understanding Non-Trade Concerns through Comparative Chinese and European Philosophy of Law
18. The Right to Food in International Law and WTO Law: An Appraisal
19. The Right to Food in China: Cultural Foundation, Present and Future
20. Projections of China’s Food Security to 2030: Obligations as an Agricultural Superpower
21. China and the Recognition and Protection of the Human Right to Water
22. China Meets Hollywood at WTO: Janus’ Faces of Freedom. Standards of Right and Wrong between National and International Moralities
23. Cultural Products and the WTO: China's Domestic Censorship and Media Control Policies
24. Trade in Audiovisuals – The Case of China
25. Rise and Demise of US Social Media in China. A Touchstone of WTO and BIT Regulations
26. Can Trade Restrictions Be Justified by Moral Values? Revisiting The Seals Disputes Through a Law and Economics Analysis
27. Health Protection Measures as Barriers to EU Exports to China in the Framework of the WTO Agreement on Sanitary and Phytosanitary Measures
28. SPS, Public Health and Environmental Provisions in East Asia RTAs: ASEAN and China
29. Product Safety in the Framework of the WTO Agreement on Technical Barriers to Trade
30. Non-Trade Concerns and Consumer Protection in China: Surrounding Issues
31. Legal Protection of Consumers in Developing Countries: An Asian Perspective
32. From Remedy of Damage to Risk Prevention. An Analysis of the New Legislative Implications of the Chapter on "Product Liability" in China’s Tort Liability Law from the Perspective of Consumer Protection
33. Tort Liability for the Compensation of Damages Caused by Dangerous Substances in China
34. The Protection of Biotechnological Innovation by Patent in the United States, Europe, France, and China. A Comparative Study from the Perspective of the TRIPs Agreement
35. Public Health, Intellectual Property Rights, and Developing Countries’ Access to Medicines
36. The Relationship between the TRIPs Agreement and the Convention on Biological Diversity (CBD): Intellectual Property and Genetic Resources, Traditional Knowledge and Folk Protection from a Chinese Perspective
37. Grasping Knowledge in Emerging Markets: Is This the Case of Western Pharmaceutical Companies in China?
Index