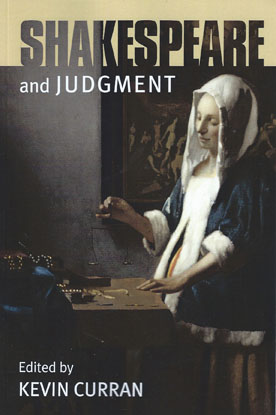 Shakespeare and Judgment gathers together an international group of scholars to address for the first time the place of judgment in Shakespearean drama.

Contributors approach the topic from a variety of cultural and theoretical perspectives, covering plays from across Shakespeare’s career and from each of the genres in which he wrote. Anchoring the volume are two critical contentions:-

Taken together, the essays in Shakespeare and Judgment offer a genuinely new account of the historical and intellectual coordinates of Shakespeare’s plays. Building on current work in legal studies, religious studies, theater history, and critical theory, the volume will be of interest to a wide range of scholars working on Shakespeare and early modern drama.

Contents:
Introduction, Kevin Curran
Part I: Staging Judgment: Deliberation in the Plays
1. Preventive Justice in Measure for Measure, Virginia Lee Strain
2. Believing in Ghosts, in Part: Judgment and Indecision in Hamlet, Vivasvan Soni
3. Shakespeare’s Law and Plowden’s Authority
Constance Jordan
Part II: Audience Judgment: Deliberation in the Theater
4. “Gently to hear, kindly to judge”: Minds at Work in Henry V, Katherine B. Attié
5. “Practis[ing] Judgment with the Disposition of Natures”: Measure for Measure, the “Discoursive” Common Law, and the “Open Court” of the Theater, Carolyn Sale
6. The Laws of Measure for Measure
Paul Yachnin
7. Prospero’s Plea: Judgment, Invention, and Political Form in The Tempest
Kevin Curran
Part III: The Ethics of Judgment
8. Antinomian Shakespeare: English Drama and Confession across the Reformation Divide, John Parker
9. Bracketed Judgment, “Un-humanizing,” and Conversion in The Merchant of Venice, Sanford Budick
10. The Judgment of the Critics that Makes us Tremble: “Distributing Complicities” in Recent Criticism of King Lear
Richard Strier.