Sharia in the Russian Empire: The Reach and Limits of Islamic Law in Central Eurasia, 1550-1900 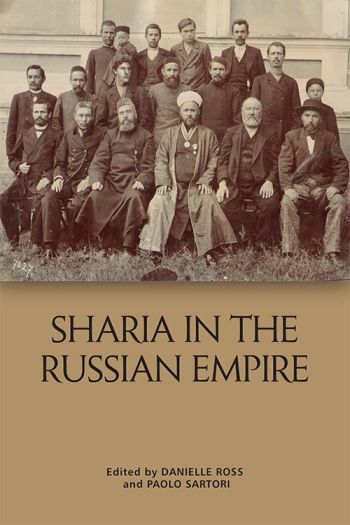 Studies the formulation, transmission and application of Islamic law under Russian colonial rule

This book looks at how Islamic law was practiced in Russia from the conquest of the empire’s first Muslim territories in the mid-1500s to the Russian Revolution of 1917, when the empire’s Muslim population had exceeded 20 million. It focuses on the training of Russian Muslim jurists, the debates over legal authority within Muslim communities and the relationship between Islamic law and ‘customary’ law. Based upon difficult to access sources written in a variety of languages (Arabic, Chaghatay, Kazakh, Persian, Tatar), it offers scholars of Russian history, Islamic history and colonial history an account of Islamic law in Russia of the same quality and detail as the scholarship currently available on Islam in the British and French colonial empires.

Contents:
Introduction
‘The Reach and Limits of Sharīʿa in the Russian Empire, ca.
1552-1917’; Danielle Ross and Paolo Sartori
Chapter 1
‘Islamic Education for All: Technological Change, Popular Literacy, and the Transformation of the Volga-Ural Madrasa, 1650s-1910s’; Danielle Ross
Chapter 2
‘Taqlīd and Discontinuity: The Transformation of Islamic Legal Authority in the Volga-Ural Region’; Nathan Spannaus
Chapter 3
‘Debunking the ‘Unfortunate Girl’ Paradigm: Volga-Ural Muslim Women’s Knowledge Culture and its Transformation across the Long Nineteenth Century’; Danielle Ross
Chapter 4
‘Between Imperial Law and Islamic Law: Muslim Subjects and the Legality of Remarriage in Nineteenth-Century Russia’; Rozaliya Garipova
Chapter 5
‘Islamic Scholars among the Kereys of Northern Kazakhstan, 1680-1850’; Allen J. Frank
Chapter 6
‘Tinkering with Codification in the Kazakh Steppe: ʿĀdat and Sharīʿa in the work of Efim Osmolovskii’; Pavel Shabley and Paolo Sartori
Chapter 7
‘Taqlīd and Ijtihād over the Centuries: The Debates on the Islamic Legal Theory in Daghestan, 1700s-1920s’; Shamil Shikhaliev
Chapter 8
‘Kunta Ḥājjī and the Stolen Horse’; Michael Kemper and Shamil Sh. Shikhaliev
Chapter 9
‘What We Talk about When We Talk about Taqlīd in Russian Central Asia’; Paolo Sartori
Chapter 10
‘Take Me to Khiva: Sharīʿa as Governance in the Oasis of Khorezm (19th–Early 20th Centuries)’; Ulfat Abdurasulov and Paolo Sartori