The Work of the British Law Commissions: Law Reform... Now? 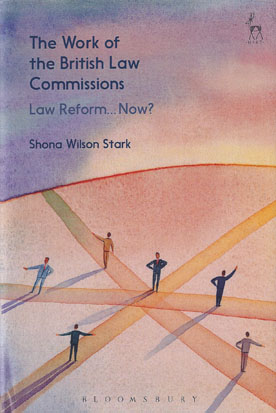 The Law Commission (of England and Wales) and the Scottish Law Commission were both established in 1965 to promote the reform of the laws of their respective jurisdictions.

Since then, they have each produced hundreds of reports across many areas of law. They are independent of government yet rely on governmental funding and governmental approval of their proposed projects. They also rely on both government and Parliament to implement their proposals.

This book examines the tension between independence and implementation and recommends how a balance can best be struck. It proposes how the Commissions should choose their projects given that their duties outweigh their resources, and how we should assess the success, or otherwise, of their output. Countries around the world have created law reform bodies in the Commissions' image.

They have evolved to remain relevant in the face of devolution, the UK's changing relationship with the European Union, increasing pressure for accountability and decreasing funding. Further changes to secure the future of independent law reform are advanced in this book.

Contents:
1. Introduction
I. Lifting the Law Reform Bonnet
II. Beyond Great Britain
III. Overview
IV. Some Final Preliminaries
2. The Origins of the Law Commissions
I. Pre-1965
II. How Soon is 'Now': Why 1965?
III. Pressures for a Scottish Law Commission
IV. The Law Commissions Act 1965
V. Consequent Issues
3. The Scope of Commission Activity
I. The 1965 Act and Discretion
II. The Need to Control and Facilitate the Exercise of Discretion
III. Previous Deficiencies in the Control and Facilitation of the Commissions' Exercise of Discretion
IV. The Project-Selection Criteria
V. Developing and Strengthening the Criteria
VI. Conclusion: Clarifying and Securing the Scope of Commission Activity
4. The Extent of Implementation
I. Preliminary Issues
II. Reasons for Non-Implementation
III. The Importance of Being Implemented
IV. Attempts to Improve Implementation
V. Conclusion: Quality Over Quantity
5. The Codification Task
I. Definition of Codification
II. Reasons for Tasking the Commissions with Codification
III. Pre-Existing Obstacles to Codification
IV. Developments Reducing the Need for Codification
V. The Commissions' Codification Track Records
VI. Conclusion: Substance Over Style
6. From Harmonisation to Devolution and Brexit
I. Collaborative Projects
II. Individual Projects
III. Devolution
IV. Conclusion: Separate Commissions Working in Sync
7. Law Reform… Now?
I. Servicing our Law Reform Machinery
II. Proposed Amendments to the 1965 Act
III. Final Remarks for Great Britain and Beyond