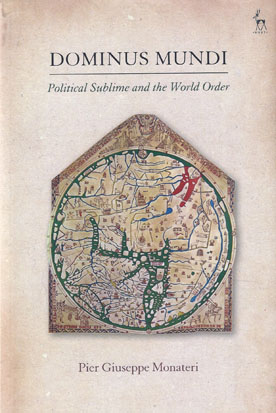 This monograph makes a seminal contribution to existing literature on the importance of Roman law in the development of political thought in Europe.

In particular it examines the expression `dominus mundi', following it through the texts of the medieval jurists - the Glossators and Post-Glossators - up to the political thought of Hobbes. Understanding the concept of dominus mundi sheds light on how medieval jurists understood ownership of individual things; it is more complex than it might seem; and this book investigates these complexities.

The book also offers important new insights into Thomas Hobbes, especially with regard to the end of dominus mundi and the replacement by Leviathan. Finally, the book has important relevance for contemporary political theory.

With fading of political diversity Monateri argues "that the actual setting of globalisation represents the reappearance of the Ghost of the Dominus Mundi, a political refoule - repressed - a reappearance of its sublime nature, and a struggle to restore its universal legitimacy, and take its place." In making this argument, the book adds an important original vision to current debates in legal and political philosophy.

Contents:
1. Master of the World and the Law of the Sea
I. The Dominus, Carl Schmitt and Beyond
II. The Dominus and Its Several Meanings
III. The Dominus and Its Genealogy
IV. Re-Thinking the Greek Rome
2. The Christian Empire as World Order
I. The Revival of the Dominus
II. Imperial Messianism
III. The Lord of the Flies
3. Political Theology from Satan to Legitimacy
I. Spatiality, Sovereignty and the Geopolitics of Discovery
II. From Justinian in Paradise to Royal Occultism
4. Demonological Inversion and the Birth of the Leviathan
I. James I, the Witches and Bodin
II. Leviathan’s Ambiguity
III. The Dominus Mundi and Hobbes’s Frontispiece
5. Sublime Dissolution
I. The Collapse of Modernity
II. New Monsters and Good Feelings
III. The Political Refoulé
IV. The Ghost of the Dominus