English and European Perspectives on Contract and Commercial Law: Essays in Honour of Hugh Beale 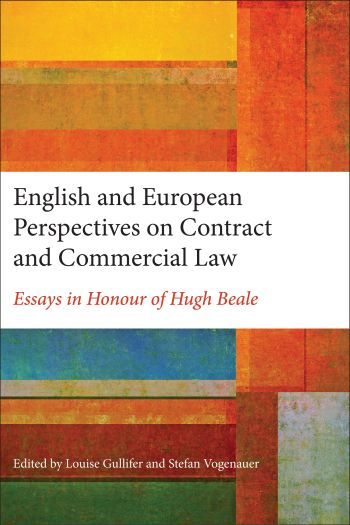 The purpose of this book is to honour the influential and wide-ranging work of Professor Hugh Beale, who retires from full time teaching at Warwick University this year. It contains essays by twenty-five very distinguished authors, each of whom has worked with Professor Beale as a co-author, as a teaching colleague, during his time as Law Commissioner of England and Wales, or as part of the study groups working in Europe on contract and commercial law.

The essays reflect different aspects of Professor Beale's interests. Some concentrate on English contract law, either from a historical or a current perspective, while others are focused on aspects of European contract law. There are four essays looking at current issues relating to security and financing, and, as befits a former Law Commissioner, three essays on law reform. The essays in the final section discuss trends in transnational and European commercial law. This book brings together the reflections of eminent writers from all over Europe on important issues facing contract and commercial law, and will be of interest to all scholars and practitioners working in area.

Contents:
LEGAL HISTORY
1.
Merchants and the Legislative Process in Thirteenth Century
England: The Making of the Statutes of Acton Burnel
(1283) and Merchants (1285)
2.
Contract Terms Between Unequal Parties in Victorian England
LAW REFORM
3.
Alternatives to Legislation: Restatements and Judicial Law Reform
4.
The Impact of Rule-making by Financial Services Regulators
on the Common Law: The Lessons of PPI
5.
Some Thoughts on Consumer Law Reform:
Consolidation, Codification or a Restatement?
ENGLISH CONTRACT LAW
6.
Freedom to Exercise Contractual Rights of Termination
7.
Regulating Unfair Terms
8.
Time to Reflect on the Right to Reject
9.
Universal Terms in Contract
10.
Some Thoughts on Undisclosed Agency
11.
Innominate Terms Revisited
12.
Variation and Termination of Consumer Contracts
EUROPEAN CONTRACT LAW
13.
Unfair Prices in the Common European Sales Law
14.
CISG and CESL: Simplicity, Fairness and Social Justice
15.
The Law of Assignment in European Contract Law
16.
Unfair Terms in Consumer Contracts
17.
‘General Principles’ of Contract Law in Transnational Instruments
18.
Interest for Delay in Payment of Money
SECURITY AND FINANCING
19.
The Assignment of Pure Intangibles in the Conflict of Laws
20.
Compulsory Central Clearing of OTC Derivatives: The
Changing Face of the Provision of Collateral
21.
European Secured Transactions Law at a Crossroad:
The Pitfalls of a ‘Piecemeal Approach’ to Harmonisation
22.
How Secure is Security?
TRENDS IN TRANSNATIONAL AND EUROPEAN COMMERCIAL LAW
23.
The Numerus Clausus of Property Rights: A European Principle?
24.
New Principles in the Legal World: The Hague Principles
on the Choice of Law in International Commercial Contracts
25.
Ex Officio Application in Case of Unenforceable Contracts
or Contract Clauses: EU Law and National Laws Confronted
Index.