Power of Persuasion: Essays by a Very Public Lawyer 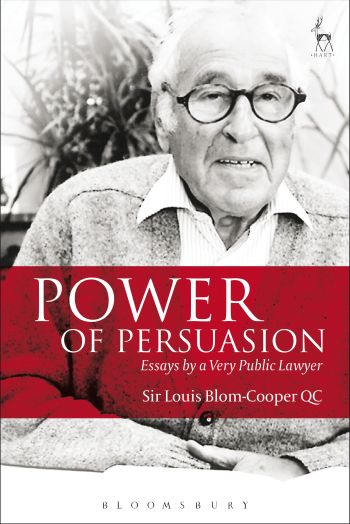 Over the developing years of the judicial review of ministerial and governmental decisions, Louis Blom-Cooper was a leading advocate who grew up with the advent of a distinctive brand of public law. His range of public activities, both in and outwith the courtroom, saw him dubbed by his colleagues as a polymath practitioner.

It included chairmanship of plural public inquiries in child abuse and mental health, media contributions in the broadsheet press and in broadcasting, and innovation in penal reform, as an ardent campaigner for the abolition of capital punishment and a plea for a modern Homicide Act. He styled himself as a modern, reconstructed liberal - a man before his time.

This collection of essays is uniquely prefaced by a self-examination of his unorthodox philosophy towards the law in action. It covers a variety of socio-legal topics that expresses his ambition to inform a poorly-educated public on the workings of the legal system. This aim involves a discussion of the constitutional history of Britain, unwritten and insufficiently interpreted; it reflects a commitment to the European Convention on Human Rights and portrays its international origins.

The collection opines on crime and punishment; in the functioning of the courts and elsewhere the political shift from the penal optimism of the 1970s to the reactionary punitiveness of the post-1990s. The essays conclude with a miscellany of affairs, reflecting on professional practices and their product of judicial heroes in Lord Reid and Lord Bingham.

Contents:
Foreword by Lord Dyson, Master of the Rolls Introduction
Part I: Public Law: Judicial and Judicious Review
1.
The Scope of Judicial Review and the Rule of Law: Between Judicial Restraint and Judicial Creativity
2.
Judicial Review: its Genesis and Growth Post-1977
3.
Judges in Public Inquiries, Redivivus
4.
The Road to Rome and Strasbourg via San Francisco: the Genesis of Human Rights
5.
Towards a Legal Forum of the Isles
Part II: Crime and Justice
6.
A Calendar of Murder: the Causes of Unjustifiable Homicide
7.
Towards a New Homicide Act
8.
The Penalty for Murder: Life after Death
9.
The Apotheosis of Amateurism
10.
English Juries on Trial
11.
The Ambit of Innocence
12.
'Consuming Your Own Smoke'
13.
Crime and Justice: a Shift in Perspective
14.
The Magistracy - a Professional Court?
15.
Serious Fraud Offences: Whither Their Trial?
16.
James Hanratty: a Vindicatory View
17.
An Advocate's Tale
18.
Criminal Justice on Trial
19.
Victims Adrift
Part III: Penal Affairs
20.
The Whys and Wherefores of Penal Policy
21.
Community Service: Penological Progress
22.
Prisoners' Right to Vote
23.
Dangerousness
Part IV: Media Law
24.
Press (Media) Freedom: Constitutional Right or Cultural Assumption?
25.
The Jurisprudence of Privacy
26.
Media Freedom: a New Concept in Free Speech
27.
Censors in the Courtroom
28.
The Historical Background to Self-Regulation of the Press
Part V: Miscellany
29.
Jan Christiaan Smuts (1870-1950): Middle Templar Extraordinary
30.
Intervention and Amicus Curiae
31.
Bench and Bar
32.
Judicial Heroes
33.
Lord Denning's Legacy: a Judicial Misfit?
34.
Pilgrims' Progress: Academics and Practitioners