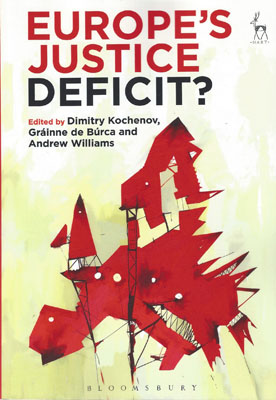 The gradual legal and political evolution of the European Union has not, thus far, been accompanied by the articulation or embrace of any substantive ideal of justice going beyond the founders' intent or the economic objectives of the market integration project.

This absence arguably compromises the foundations of the EU legal and political system since the relationship between law and justice - a crucial question within any constitutional system - remains largely unaddressed.

This edited volume brings together a number of concise contributions by leading academics and young scholars whose work addresses both legal and philosophical aspects of justice in the European context. The aim of the volume is to appraise the existence and nature of this deficit, its implications for Europe's future, and to begin a critical discussion about how it might be addressed.

There have been many accounts of the EU as a story of constitutional evolution and a system of transnational governance, but few which pay sustained attention to the implications for justice. The EU today has moved beyond its initial and primary emphasis on the establishment of an internal market, as the growing importance of EU citizenship and social rights suggests.

Yet, most legal analyses of the EU Treaties and of EU case law remain premised broadly on the assumption that EU law still largely serves the purpose of perfecting what is fundamentally a system of economic integration. The place to be occupied by the underlying substantive ideal of justice remains significantly underspecified or even vacant, creating a tension between the market-oriented foundation of the Union and the contemporary essence of its constitutional system.

The relationship of law to justice is a core dimension of constitutional systems around the world, and the EU is arguably no different in this respect. The critical assessment of justice in the EU provided by the contributions to this book will help to create a fuller picture of the justice deficit in the EU, and at the same time open up an important new avenue of legal research of immediate importance.

Contents:
Foreword
Preface
Table of cases
The list of contributors
Introduction
1. Introduction: Europe's Justice Deficit: The editors
Part I The Many Faces of Justice in the EU
2. Justice and Justification: Neil Walker
3. No Need to Be Afraid of Justice. Democracy and Justification in the EU: Jurgen Neyer
4. Disproportionate Individualism: Stavros Tsakyrakis
5. Problems with Justice in the European Union: Andrew Williams
6. The Preoccupation with Rights and the Embrace of Inclusion: A Critique: Alexander Somek
7. A Reply to Somek: Andrew Williams
8. The EU as a Justice Enabling Institution: A Sen-Inspired Vision: Dimitry Kochenov
9. The 'Justice Deficit' Debate in EU Private Law: Daniela Caruso
Part II Justice and Institutions
10. The Role of Institutional Justice as a Check of Empirical Anarchy: Suryapratim Roy
11. The Expressive Deficit of EU Law: Gareth Davies
12. Institutional Responsiveness in the EU: Vlad Perju
13. Liberal Constitutionalism, the European Social Market, and the 'Importance of Background Justice': Oliver Gerstenberg
14. Justice Deficit and Legality Review of EU Acts: Dorota Leczykiewicz
Part III Social Justice and Solidarity in Europe
15. Swabian Housewives, Suffering Southerners: The Contestability of Justice as Exemplified by the Eurozone Crisis: Danny Nicol
16. Markets, Demoi, and Social Justice: Reflections on the Crisis of the European Union: Mike Wilkinson
17. The Choice for Sustainable Solidarity in Europe: Kalypso Nicolaidis and Juri Viehoff
18. National and Transnational Justice Claims: Floris de Witte
19. Double Life of the European Union: The EU's Human Rights Duties and Responsibilities for Human Rights: Samantha Besson
Part IV Justice, Movement and Space
20. Spatial Justice in the EU: Antonia Layard
21. Justice from Below: Tackling the Local Inequalities in the EU: Fernanda Nicola
22. Taking Change Seriously - The Discourse of Justice and the Reproduction of the Status Quo: Damjan Kukovec
23. A Short Enquiry Concerning Political Justice in Europe and Its Influence on Democracy and Fairness: Agustin Menendez
Part V Justice and the Political
24. In the Name of the People: EU Justice as Politics: Daniel Augenstein
25. Political Justice for an Ever Closer Union of European Peoples: Richard Bellamy
26. Contingency of Political Justice and Depoliticized Governance in the EU: Jiri Priban
27. Is a Transnational Citizenship (Still) Enough?: Justine Lacroix
28. Justice, the Public Square and Differentiated Citizenship in the EU: Dora Kostakopoulou
Part VI Generational Justice in Europe
29. Vulnerability and Victimhood as Grounds for Reparative Justice Distributive in Nature: Andras Sajo
30. Just Fatherlands? The Shoah Legacy in Strasbourg Jurisprudence: Carole Lyons
31. Negotiating Nature and Ecological Justice in the EU: Jane Holder
32. Two Visions of Justice in the EU: Sionaidh Douglas-Scott Conclusion
33. Conclusion: Reclaiming the Importance of Justice: The editors