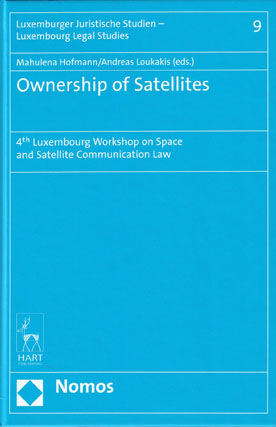 The publication Ownership of Satellites written under the editorship of professor Mahulena Hofmann and Dr. Andreas Loukakis from Luxembourg by a group of prominent international authors from the academia and practice of the law of space activities, deals with one of the imminent problems of the law of outer space - the ownership of satellites and its transfer.

The reason for opening the discussion on this subject is the fact that on the one hand, the main legal problems remain - only the launching State can register a space object and only the launching state is liable for damages caused by the satellite, and on the other hand the emergence of several new phenomena, such as condominium of satellites or the exponential existence of small satellites.

Furthermore, the relation between the registration of space objects under UN framework and the assignment of frequencies is practically unknown to non-internals. This situation contributed to the wish to analyze this issue not only from the perspective of international law of outer space, but also from the perspective of telecommunication law and European Union law, offering insights to the current practice.

The publication is a contribution to the theoretical discussions on the law of outer space, but can serve as an important tool used by the lawyers, including those from the financial and insurance sectors.

Material was gathered from the 4th Luxembourg Workshop on Space and Satellite Communication Law.