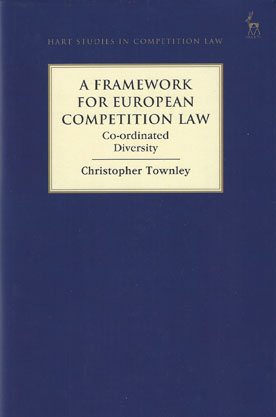 The EU's motto is `United in Diversity'; yet the received wisdom in competition law scholarship is that uniformity in competition law enforcement in the EU is important (particularly EU competition law (Articles 101 and 102 TFEU and the merger rules), but also Member State laws). Nearly everything is geared to achieving this.

The core argument of this book is that allowing more diversity in competition law, both in substantive law and procedural law, is sensible. The advantages of diversity are legion, including allowing for diverse national policy preferences; enabling experimentation and innovation; and better uncovering national preferences. Its impact could be significant, changing the results in individual cases; the way cases are argued and what information is relevant.

More importantly, it will fundamentally alter the way states and competition authorities interact; allowing space for disagreement and uncertainty. This will improve the quality and transparency of discussions. It should also increase the legitimacy of competition enforcement in Europe (rebalancing towards the Member States); and improve the amount and quality of competition research. More generally, by embracing the differences between the member states, the EU could go some way to counter the charge of being democratically deficit.

A timely and ambitious work, this book will be read with interest by all competition scholars.