The Implementation of the New Insolvency Regulation: Improving Cooperation and Mutual Trust 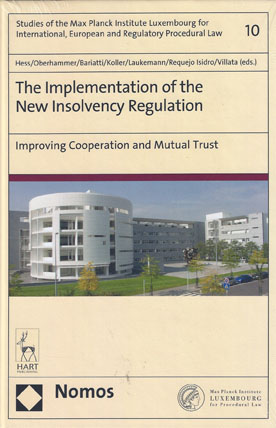 The study is a result of a collaborative research project addressing The Implementation of the New Insolvency Regulation – Improving Cooperation and Mutual Trust.

The project was undertaken by the Max Planck Institute Luxembourg for Procedural Law, the University of Vienna and the University of Milan, and co-funded by the European Union as part of the Commission's Action Grants 2013 for Civil Justice.

The focus of the study concerns specific issues of cross-border insolvencies under the recast of the Insolvency Regulation which already has been prepared by a large part of the contributing authors in the Heidelberg-Vienna-Luxembourg Report.

The study is comprised of three major topics:-

1.The Regulation's extended scope of application, including pre-insolvency and hybrid proceedings, the relationship between Article 1(1) of the Regulation and its Annex A, as well as the interplay between the Insolvency Regulation and the Brussels Ibis Regulation;

3.insolvencies of groups of companies, with a particular focus on jurisdiction, COMI-migration, “group coordination proceedings” and other instruments of coordination.