This book is now Out of Print.
A new edition has been published, the details can be seen here:
Dalhuisen on Transnational and Comparative Commercial, Financial and Trade Law Volume 1: The Transnationalisation of Commercial and Financial Law. The New Lex Mercatoria and its Sources 8th ed isbn 9781509949182 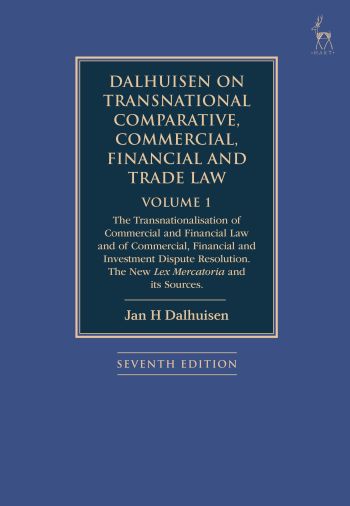 
This is the seventh edition of the leading work on transnational and comparative commercial, financial, and trade law, covering a wide range of complex topics in the modern law of international commerce and finance. As a guide for students and practitioners it has proven to be unrivalled. The work is divided into three volumes, each of which can be used independently or as part of the complete work.

Volume 1, in the first chapter, covers the roots and foundations of private law; the different origins, structure, and orientation of civil and common law; the forces behind the emergence of a new transnational commercial and financial legal order, its meaning, concepts, and operation; the theoretical basis of the transnationalisation of the law in the professional sphere in that order; its methodology and the autonomous sources of the new law merchant or modern lex mercatoria, its international finance-driven impulses, and its relationship to domestic and transnational public policy and public order requirements. The second chapter covers the transnationalisation of dispute resolution in that order, especially international arbitration, and contains a critical analysis of the main challenges to its success, continuing credibility, and effectiveness.

All three volumes may be purchased separately or as part of a single set.