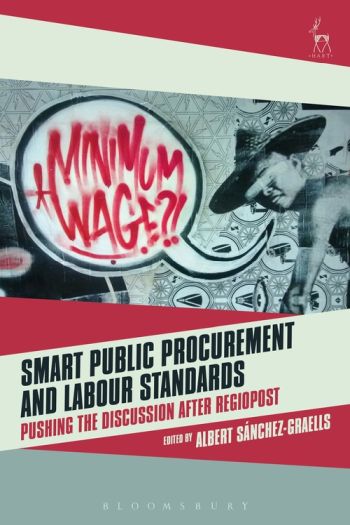 Smart procurement aims to leverage public buying power in pursuit of social, environmental and innovation goals. Socially-oriented smart procurement has been a controversial issue under EU law. The extent to which the Court of Justice (ECJ) has supported or rather constrained its development has been intensely debated by academics and practitioners alike.

After a slow development of a seemingly permissive approach, the ECJ case law reached an apparent turning point a decade ago in the often criticised judgments in Ruffert and Laval, which left a number of open questions. The recent Bundesdruckerei and RegioPost Judgments have furthered the ECJ case law on socially-oriented smart procurement and aimed to clarify the limits within which Member State can use it to enforce labour standards. This case law opens up additional possibilities, but it also creates legal uncertainty concerning the interaction of the EU rules on the posting of workers, public procurement and fundamental internal market freedoms. These developments are magnified by the reform of the EU public procurement rules in 2014.

This book assesses the limits that the revised EU rules and the new ECJ case law impose on socially-oriented smart procurement and, more generally, critically reflects on potential future developments in this area of intersection of several strands of EU economic law.

Contents:
1. Introduction
Albert Sanchez-Graells
Part I: Constitutional and Internal Market Aspects of the Enforcement of Labour Standards through Social Smart Procurement in the EU
2. RegioPost-A Constitutional Perspective
Phil Syrpis
3. Article 56 TFEU and the Principle of Proportionality: Why, When and How Should They be Applied After RegioPost?
Piotr Bogdanowicz
4. Upholding General Principles versus Distinguishing Cases: On the Use of Precedent in EU Public Procurement Law (A Case Study)
Roberto Caranta
Part II: Procurement and Market Perspectives of the Enforcement of Labour Standards in the EU
5. Living Wages in Public Contracts: Impact of the RegioPost Judgment and the Proposed Revisions to the Posted Workers Directive
Abby Semple
6. Competition and State Aid Implications of `Public' Minimum Wage Clauses in EU Public Procurement after RegioPost
Albert Sanchez-Graells
7. Public Procurement and Business for Value: Looking for Alignment in Law and Practice
Nina Boeger
Part III: Labour Law Perspectives of Social Smart Procurement in the EU
8. The Operation of Labour Law as the Exception: The Case of Public Procurement
Lisa Rodgers
9. Government as a Socially Responsible Market Actor After RegioPost
A.C.L. Davies
10. Fair's Fair: Public Procurement, Posting and Pay
Catherine Barnard
11. Collective Bargaining and Social Dumping in Posting and Procurement: What Might Come from Recent Court of Justice Case Law and the Proposed Reform of the Posted Workers Directive?
Tonia Novitz
Part IV: Perspectives on Social Smart Procurement Beyond the EU
12. RegioPost and Labour Rights Conditionality: Comparing the EU Procurement Regime with the WTO Government Procurement Agreement
Maria Anna Corvaglia
13. A View from Outside the EU: UNCITRAL's Approach to Balancing Economic and Social Considerations in Public Procurement
Caroline Nicholas