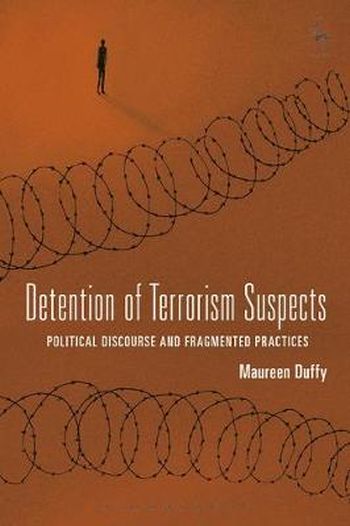 Controversial erosions of individual liberties in the name of anti-terrorism are ongoing in liberal democracies. The focus of this book is on the manner in which strategic discourse has been used to create accepted political narratives. It specifically links aspects of that discourse to problematic and evolving terrorism detention practices that happen outside of traditional criminal and wartime paradigms, with examples including the detentions at Guantanamo Bay and security certificates in Canada.

This book suggests that biased political discourse has, in some respects, continued to fuel public misconceptions about terrorism, which have then led to problematic legal enactments, supported by those misconceptions. It introduces this idea by presenting current examples, such as some of the language used by US President Donald Trump regarding terrorism, and it argues that such language has supported questionable legal responses to terrorism. It then critiques political arguments that began after 9/11, many of which are still foundational as terrorism detention practices evolve. The focus is on language emanating from the US, and the book links this language to specific examples of changed detention practices from the US, Canada, and the UK. Terrorism is undoubtedly a real threat, but that does not mean that all perceptions of how to respond to terrorism are valid.

As international terrorism continues to grow and to change, this book offers valuable insights into problems that have arisen from specific responses, with the objective of avoiding those problems going forward.

Contents:
Part I: Political Discourse
1. Language Manufactures Truth: The Power of Labels
I. The Beginning of the Conversation: Narratives Wield Great Power
II. Whoever Prevails with Duelling Labels Wins the Day: 'Muslim Ban' or 'Extreme Vetting'?
III. Motive and Omar Mateen: Immutable Characteristics Can Lead to a Label that Could Obscure True Motive and Undermine Systemic Responses
IV. 'A Rose by Any Other Name …': Strategically Naming an International 'Terrorist' Group is Key to the Narrative
V. Conclusion
2. Breaking Down and Reconstructing Discourse Can Reveal New Realities
I. Introduction: Fractured Narratives and Manufactured Confusion
II. The Same Scenario, or the Same Words, with Different Meanings for Different People
III. An Example: Kafka and Shifting the Kaleidoscope
IV. 'Deconstructing' Anti-terrorism Detention Discourse
V. Deconstructing and Reconstructing the Post-9/11 Discourse Using Argumentation Theory
VI. Against this Backdrop, Post-9/11 Terrorism Detention Discourse Successfully Involved the Use of Effective Argumentation Tools
VII. Conclusion
3. Layers of Argumentation Tools and a Fractured Post-911 Narrative
I. Introduction: How Threads of Perception Developed after 9/11
II. Manufacturing Confusion: Euphemisms Played a Key Role in Influencing Public Perception
III. Forward-Looking Threat-Based Discourse Perpetuated Already Rattled Nerves and Made Governmental Initiatives More Persuasive in the US
IV. A Fractured Narrative Arose After 9/11, as Demonstrated by One Conversation between Representatives of Branches of the US Government
V. Conclusion
Part II: Fragmented Practices
4. Hasty Inductive Generalisation: The Problem with the Claim that the 9/11 Attacks Exposed a Need for New Detention Paradigms
I. Crisis Shifts in Long-Standing Detention Paradigms Occurred after the 9/11 Attacks
II. The 'Unprecedented' Nature of the 9/11 Attacks
III. The 9/11 Attacks Led to a Claim of Presumptive Inadequacy of National Criminal Justice Systems in Certain Cases
IV. Certain Commonalities Emerged across Jurisdictions Regarding Extraordinary Detention Practices
V. Special Mechanisms that Bypassed the Criminal Justice System Entirely
VI. Other Examples of Changes: Torture and Targeted Killings
VII. Conclusion
5. False Premise: Non-citizens as the Terrorist 'Other'
I. Many Post-9/11 Detention Changes Sprang from the False and Simplistic Idea that Terrorists were Non-citizens
II. The Claimed Need to Protect 'Us' from 'the Other'
III. The Othering before and after 9/11 was Directed between Organisations Like Al-Qaeda and those Claiming to Represent the West, Each Accelerating it against the Other
IV. The Cycle of Othering that Led to the 9/11 Attacks Continued in Some of the National Responses to the Attacks
V. The 'Other' Moves Forward as a Foundation for Extraordinary Terrorism Detention Practices
VI. Conclusion: The False Premise of the Non-citizen Terrorist Other, which was Dominant in Post-9/11 Responses, Remains Foundational in Different Ways in Different Countries
6. False Dichotomies in the Narrative: The 'Either/or' Dilemma
I. Binary Language in the Post-9/11 Narrative and How it Precluded Nuance that Might Have Led to Better Responses
II. Incommensurability in Binary-Based Discourse: The False Dichotomy of Balancing Liberty and Security Dominated after 9/11
III. The Paradigm Fractures: The Misleading American Crime-or-War Detentions Debate
IV. Terrorism Detentions: 'Everything Old is New Again'
V. Conclusion: Deconstructing the Binaries
Conclusion: Turning the Kaleidoscope
I. The Conversation Continues: Can, or Should, the Fracturing in the Post-9/11 Terrorism Detention Narrative be Repaired?
II. Changes to Political Discourse
III. Fragmented Practices and Regrets
IV. A Way Forward?