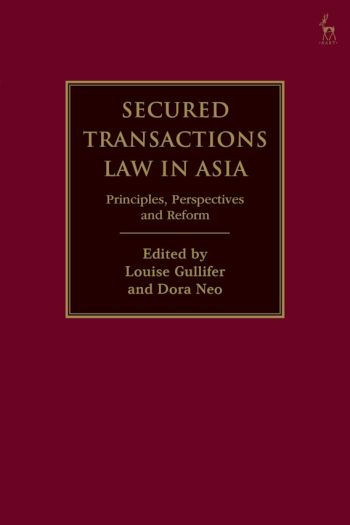 This collection of essays offers a unique insight and overview of the secured transactions law in many of the most important countries in Asia, as well as reflections on the need for, benefits of and challenges for reform in this area of the law.

The book provides a mixture of general reflections on the history, successes and challenges of secured transaction law reform, and critical discussion of the law in a number of Asian countries. In some of the countries, the law has already been reformed, or reform is under way, and here the reforms are considered critically, with recommendations for future work. In other countries, the law is not yet reformed, and the existing law is analysed so as to determine what reform is desirable, and whether it is likely to take place.

First, this book will enable those engaging with the law in Asia to understand better the contours of the law in both civil and common law jurisdictions. Second, it provides analytical insights into why secured transactions law reform happens or does not happen, the different methods by which reform takes place, the benefits of reform and the difficulties that need to be overcome for successful reform. Third, it discusses the need for reform where none has yet taken place and critically assesses the reforms which have already been enacted or are being considered. In addition to providing a forum for discussion in relation to the countries in question, this book is also a timely contribution to the wider debate on secured transactions law reform which is taking place around the world.