The Acquisition of Territory in International Law 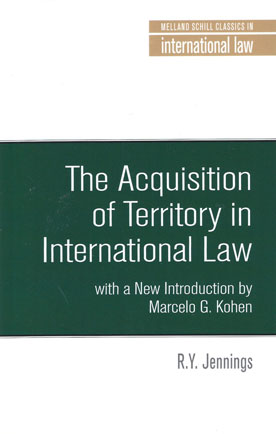 Originally published by Manchester University Press in 1963, this book is now regarded as a classic of international law literature.

Jennings examines the major issues relating to the acquisition of territory in a stimulating and elegant manner, providing a sense of the critical relationship between law and politics on the international scene - vital if law is to be practiced and interpreted correctly.

This reissue features a new introduction by Marcelo G. Kohen of the Graduate Institute of International and Development Studies, Geneva, contextualising the work and discussing its continued relevance to students of international law and international lawyers themselves. He is one of the leading experts on questions of acquisition of territory, having been involved in numerous territorial disputes before the International Court of Justice.

The late Sir Robert Yewdall Jennings (1913-2004) became a fellow of Jesus College, Cambridge in 1939, and was appointed as the Whewell Professor of International Law at the University of Cambridge in 1955. He resigned from this chair in 1982 when he was elected as a judge of the International Court of Justice where he served until his retirement in 1995. He was President of the Court from 1991 to 1994.