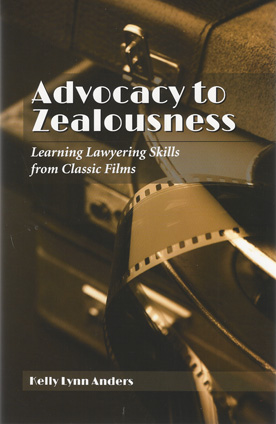 Advocacy to Zealousness: Learning Lawyering Skills from Classic Films includes 26 skills, listed in alphabetical order and appearing in separate chapters, which should ideally be in every lawyer’s toolbox. Each is an example of professionalism, and all are possible for every current or future lawyer to attain or sharpen.

They also speak to our needs in the legal profession in the new millennium. Interspersed throughout the text are subtle references to diversity, both in the practice of law, as well as in various film references and storylines.

Each chapter includes a discussion of the skill and its use for lawyers, a synopsis of the film associated with the skill, film discussion questions, and brief exercises for improvement. The format encourages readers to either methodically review each chapter in alphabetical order, or skip around as needs and interests dictate. The book concludes with a comprehensive index.

Images, be they positive or negative, are powerful and long lasting. Those found in popular films are often our only points of reference until we meet the real thing — or assume the role ourselves. Many professors already use film clips in their classes, but, until Advocacy to Zealousness there was no singular point of reference for films selected solely for the purpose of fostering and sharpening lawyering skills. Legal skills training needn’t be dry or cumbersome. With creativity and planning, it can instead be educational, memorable, and enjoyable — while also remaining comprehensive and relevant — thereby enhancing the practice of law and the legal profession as a whole.

Anders spent more than three years sharpening the list of lawyering skills, and she researched and analyzed 327 films to select the 26 that are included in the book. Every film selected was released before the adoption of the modern film rating system in 1968, which facilitates showing them in a variety of classroom settings because they lack the expletives, nudity, and graphic violence frequently found in modern films. Additionally, each film is available in DVD format, and most feature diverse characters in leading or supporting roles.