The Constitution and Government of Australia, 1788 to 1919 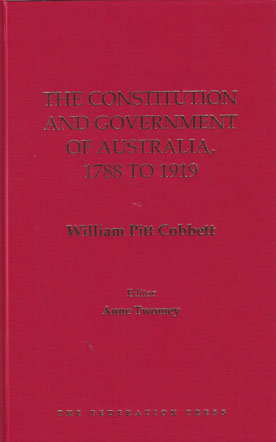 Between 1910 and 1919, William Pitt Cobbett, former Professor of Law and Dean of the Sydney Law School, wrote what would become his great opus on the Constitution and Government of Australia but the manuscript was never published.

Its publication had been frustrated in the period following his death by the High Court’s judgment in the Engineers Case in 1920 and the new constitutional order it created. A century later, Professor Anne Twomey, has sensitively edited Cobbett’s original manuscript, taking care to preserve the integrity of his work.

The Federation Press, with the support of the Francis Forbes Society for Australian Legal History, will publish this important historical work which provides a detailed perspective of how the Constitution operated in the first two decades after federation.

"This manuscript represents one of the most poignant tragedies of life—the failure to fulfil a high aim because sickness and ultimately death stepped in to bar the way." — from the Preface by J Macmillan Brown, September 1922