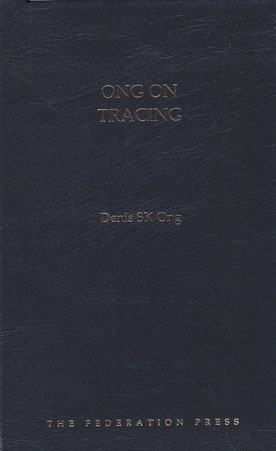 Ong on Tracing by Professor Denis SK Ong, is the first scholarly monograph published in Australia to analyse and explain the complex principles relating to the tracing of ownership of property at common law and in equity.

Topics addressed with Ong’s characteristic clear and forthright consideration of both Australian and English authorities include: the differences between tracing at common law and in equity; whether there is any distinction between tracing and “following”; whether “backward tracing” is conceptually sound; situations where tracing is impossible; tracing the ownership of property into bank accounts and other assets; the relationship between tracing and constructive trusts; the application of statutes of limitation to tracing claims.

This is Professor Ong’s eighth major treatise in private law and complements his earlier works which now include:-

Ong on Tracing will be a valuable resource for commercial lawyers, barristers, academics and the judiciary.

Contents:
Preface
Table of Cases
Table of Statutes
1. Tracing at Common Law
2. Tracing in Equity
3. No Distinction Between Following And Tracing
4. Tracing as Part of a Composite of Remedies
5. Is Backward Tracing Possible?
6. When Tracing Impossible to Initiate
7. Tracing into Bank and Other Accounts
8. Tracing into Assets other than Credit Balances in Accounts
9. Tracing and Constructive Trusts
10. Tracing and the Statutes of Limitations
Index