This book is now Out of Print.
A new edition has been published, the details can be seen here:
Employment Law in Scotland 3rd ed isbn 9781526509628 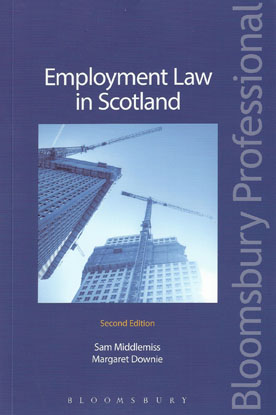 Employment Law in Scotland, 2nd edition is an essential one stop source of information for practitioners working in this complex area of law.

The authors have brought together in a single comprehensive guide all the areas of employment and labour law that are relevant to the parties involved in the employment relationship.

It explains the law of employment as it applies to Scotland and details the differences in both the law itself and in its interpretation between Scotland and the rest of the UK.

Each area of employment is considered in depth and includes reference to relevant primary and secondary research materials in the UK and further afield.

Written in an accessible style, the second edition of this text has been updated to include: