Contract Law of the Internal Market 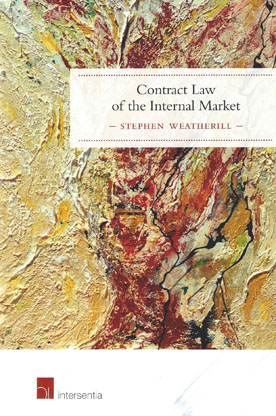 The thematic argument that forms the core of this book holds that it is important in understanding the European Union’s impact on private and especially contract law that the European Union has only a limited competence conferred by its founding Treaties, but that, largely as a consequence of the Court’s generous reading of the scope of the internal market, those limits are less of a restraint than may initially be supposed and that, moreover, pursuit of, in short, social justice is less constitutionally elusive than is often alleged.

It provides an authoritative account of the actual and possible scope of the European Union’s role and also interrogates the question whether the European Union’s influence on private and especially contract law is benign or disruptive, in particular in the context of that constitutionally limited competence. This is timely, not least because the Commission’s review of contract law, initiated in 2001, has still not run its course and may never do so. It is a continuing process. And the constitutional dimension has tended to be neglected.

The book insists on the need for awareness of a complex interaction of often ambiguous constitutional rules, often politically inconsistent institutional rhythms and often evasive judicial pronouncements. And it shows how the European Union’s role is not simply a niche area that has grown erratically but ultimately remains on the edges of the European Union's core public law activities, but rather that the rise of European Union private and especially contract law asks some vividly important questions about the principle and practice of conferred competence and about the choice of priorities in market regulation as protective instincts and deregulatory impulses collide. The adjustments made by the Treaty of Lisbon, especially but not only the grant of binding effect to the Charter of Fundamental Rights, have sharpened the interest.

The Competence of the European Union to Intervene in Private (Especially Contract) Law is written for both private and EU lawyers.