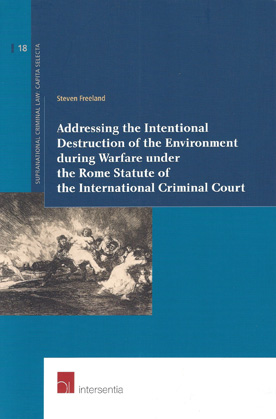 Acts perpetrated during the course of warfare have, through the ages, led to significant environmental destruction. These have included situations where the natural environment has intentionally been targeted as a ‘victim’, or somehow manipulated to serve as a ‘weapon’ of warfare.

Until recently, such acts were generally regarded as an unfortunate but unavoidable element of armed conflict, despite their potentially disastrous impacts. The existing international rules have largely been ineffective and inappropriate, and have in practical terms done little to deter deliberate environmental destruction, particularly when measured against perceived military advantages.

However, as the significance of the environment has come to be more widely understood and recognised, this is no longer acceptable, particularly given the ongoing development of weapons capable of widespread and significant damage. This book therefore examines the current international legal regime relevant to the intentional destruction of the environment during warfare, and argues that such acts should, in appropriate circumstances, be recognised as an international crime and should be subject to more effective rules giving rise to international criminal responsibility.

It also suggests a framework within the Rome Statute of the International Criminal Court as to how this might be achieved.