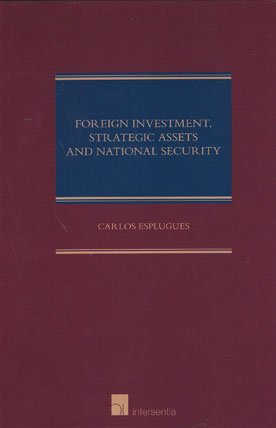 At the time of a paradigm change Foreign Investment, Strategic Assets and National Security is a timely analysis of the changing attitude towards foreign investment in major economies, namely the United States of America, the People’s Republic of China, Australia, Canada, and Germany, France and the United Kingdom as representatives of the European Union.

Foreign investment has grown steadily for decades and the de-regulation of international trade and investment was a widely accepted trend, particularly in developed countries. Increasingly, however, this development is encountered by opposition. Globalisation and socio-economic effects of mergers and acquisitions of domestic firms by foreign investors receive less support from the general public.

Concerns about national security, protection of new technologies and competitiveness are raised. This leads national and regional legislators to develop new mechanisms to control foreign investments, particularly in light of national security. The widely adopted and traditional ex post approach linked to investment treaties is now enhanced by an increased focus on the phase prior to the actual implementation of the investment.

This legal development and the new screening systems are captured in this book and it is explained how the present paradigm change is affecting the legal rules in practice. It is a must read for everyone working in the field.