The Future of the European Law of Civil Procedure 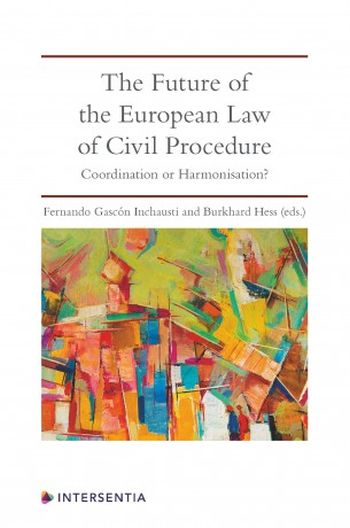 The European lawmaker is currently overseeing what appears to be a paradigm shift in the way that cross-border litigation is conducted within the European Union (EU). This matter was initially conceptualised from the perspective of international judicial cooperation, based on the notion of mutual recognition. Recent developments, however, have introduced the option of harmonisation as a new and complementary approach to consolidating European Civil Justice. It is a controversial decision due to traditional “procedural autonomy” of the Member States and the domestic reluctance to cede any of it. This book contributes to the current discussions surrounding this European change of tack, identifying progress made as well as limitations encountered.

The first part of the book is focused on the possible methodological approaches, with special emphasis on the role of the Court of Justice of the European Union as a “promoter” - on the basis of the principles of effectiveness and equivalence - and on the constitutional dimension of European procedural law as a starting point for harmonisation. The second part confronts the reader with the current status quo, that is, the currently existing level of harmonisation. Firstly, in a “vertical” manner, through the regulations on international judicial cooperation and, more singularly, in the field of provisional and protective relief, through the European Account Preservation Order. This is also achieved horizontally, through the promotion of harmonised standards in terms of access to information and evidence, promoted by the directives on intellectual property rights and competition damages, regarding the protection of confidential information, present in the directive on trade secrets and in the field of data protection. Looking ahead to the future, the third part analyses two initiatives that have helped to foster this interest in the harmonisation of national civil procedural legislation in the EU. On the one hand, the ELI-UNIDROIT project to elaborate a set of European Rules of Civil Procedure, which is already in a very advanced phase of development. On the other hand, the works promoted by the European Parliament which culminated in 2017 in a proposal for a directive on common minimum standards of civil procedure in the EU.

Harmonisation of Civil Procedure in Europe provides precious insight into the dynamics of this significant evolution in European civil procedure, clearly outlining the motivations of the various national and institutional players involved and examining potential obstacles likely to be encountered along the way. The book represents a work of reference for anyone involved in academia, practice or law reform in this subject area.