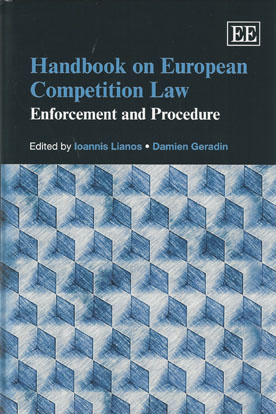 A rich compendium of commentary and analysis on all the main themes of competition law Extensive coverage of both substantive, procedural and enforcement issues in 2 volumes.

Volume 1: sets the context for examination of substantive law by reviewing and analyzing the goals of competition law. It then covers the substantive building blocks of EU competition law, including horizontal and vertical agreements, cartels, mergers, and also provides valuable coverage of the interaction between competition and regulation, competition law and intellectual property rights, hub and spoke collusion, and information exchange agreements. The importance of the abuse of dominance doctrine is reflected in 4 discrete chapters considering the concept of dominance, exploitative abuses, exclusionary pricing abuses, and exclusionary non-pricing abuses.

This Handbook will be an indispensable reference work for practitioners and scholars, as well as for those in an enforcement environment.