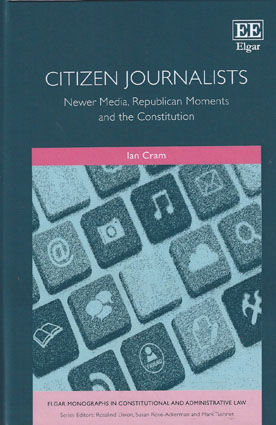 This monograph explores the phenomenon of ‘citizen journalism’ from a legal and constitutional perspective. It describes and evaluates emerging patterns of communication between a new and diverse set of speakers and their audiences.

Drawing upon political theory, the book considers the extent to which the constitutional and legal frameworks of modern liberal states allow for a ‘contestatory space’ that advances the scope for non-traditional speakers to participate in policy debates and to hold elites to account.

Topics covered include the regulation of offensive, abusive and anonymous speech, online defamation, compelled disclosure of ‘journalists’’ sources, private online research by jurors and analysis of pre-Web 2.0 laws application to non-traditional media speakers and outlets. After surveying a range of criminal and civil law provisions that impair the communicative reach of non-mainstream speakers, the broad conclusion casts doubt upon the capacity of ‘citizen journalists’ to effect a significant shift towards republican self-rule.

Offering an original analysis of the phenomenon of ‘citizen journalism’ with developments from a broad range of jurisdictions, this book is a valuable resource for students, academics, policy makers and law reform agencies in the fields constitutional law, human rights, media freedom, journalism and comparative media regulation.

Contents:
1. Introduction: Republican Moments, Machiavelli and Digital Communications
2. A Digital Republic of Citizens
3. Against Civility? - Arguments for Protecting ‘Bad Taste’, Disrespectful and Anonymous Online Speakers
4. Beyond the Fourth Estate: Rethinking the Privileges of ‘Journalists’ in the Era of New Media
5. Google and the ‘Unvirtuous’ Juror? - A Comparative Constitutional Analysis of Some Digital Challenges to Fair Trials
6. Conclusion: The Sceptical Cyber-republican
Index