A Guide to The Immigration Act 2016 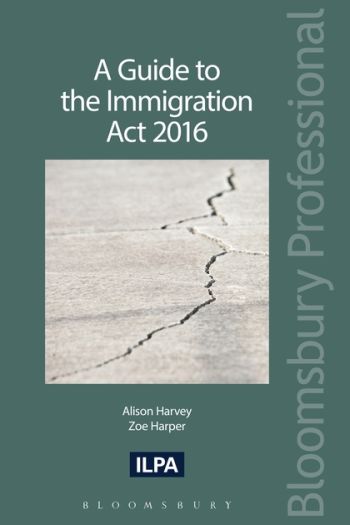 A Guide to The Immigration Act 2016 is produced in association with ILPA and provides a clear and straightforward explanation to the provisions of this legislation, with relevant commentary following each section of the Act.

Those litigating will be able to identify all relevant sources and materials rapidly. Practitioners from other areas of law affected by the provisions in the context of housing, social welfare and employment law will be able rapidly to navigate these complex provisions and to understand them.

The UK Government stated that its purpose in bringing forward this legislation was to tackle illegal immigration by making it harder to live and work in the United Kingdom without permission. The Immigration Act 2016 not only makes changes to immigration law and practice but also extends immigration control into other areas such as housing, social welfare and employment to create the 'hostile environment' envisaged.

The approach is to summarise each provision of the Act and to set it within both its political and legal context, providing full legal references as well identifying relevant guidance, supporting materials and statements from parliamentary debates.

The aim of the publication is to provide practitioners and academic and political commentators with a comprehensive guide to the Act, the bulk of the work being comments on the legal provisions interleaved with each section of the Act.

Contents:
Introduction
Relevant materials: a comprehensive list of all materials relevant to a study of the Act
Understanding what is in force
Section by section commentary
Copies of documents unavailable elsewhere