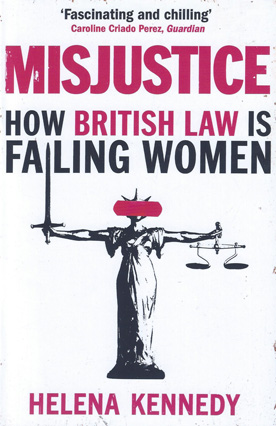 In 1992, barrister Helena Kennedy wrote the seminal Eve Was Framed, which interrogated the way women were treated by the British justice system. It exploded any notion that the law is impartial when it comes to gender.

She assumed things would have changed by now. And some things have, but too many of the old prejudices persist alongside significant and distressing new issues.

In Eve Was Shamed Helena Kennedy forensically examines the pressing new evidence that women are still being routinely discriminated against when it comes to the law. From:-

She reserves particular concern for the effects of the internet, from the influence of pornography to the use of social media as evidence.

The law holds up a mirror to society and it is failing women. In this richly detailed and shocking book, one of our most eminent human rights thinkers and practitioners shows with force and fury that change for women cannot come soon enough. And it must start at the heart of what makes society just.