Rather His Own Man: In Court with Tyrants, Tarts and Troublemakers 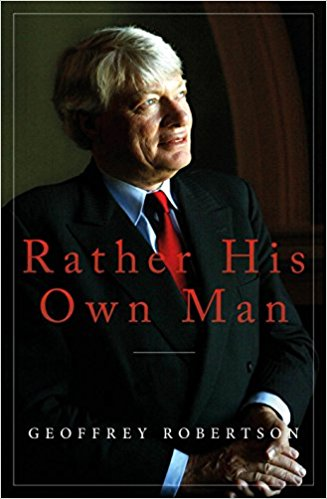 Geoffrey Robertson led students in the 60s to demand an end to racism and censorship. He went on to become a top human rights advocate, saving the lives of many death-row inmates, freeing dissidents and taking on tyrants in a career marked by courage, determination and a fierce independence.

In this witty, honest and sometimes irreverent memoir, he recalls battles on behalf of George Harrison and Julian Assange, Salman Rushdie and Václav Havel, Mike Tyson and the Sex Pistols, and battles against General Pinochet, Lee Kuan Yew and Mrs Thatcher (the true story of Spycatcher is told for the first time)

Interspersed with these forensic fireworks is the story of a pimply schoolboy from a state comprehensive, inspired by a banned book to become a barrister at the Old Bailey and who went on to found the UK's leading human rights practice (Doughty Street Chambers) and to defend troublemakers throughout the world.

Rather His Own Man captures the drama of the trial, the thrill of victory and the feeling of courtus interruptus when a big case settles. Its cast of characters includes Princess Diana, Pee-Wee Herman, Dame Edna, the Queen and Rupert the bear and the media mogul. It s a read that is both exhilarating and erudite and very funny.