Administrative Justice in the UN: Procedural Protections, Gaps and Proposals for Reform 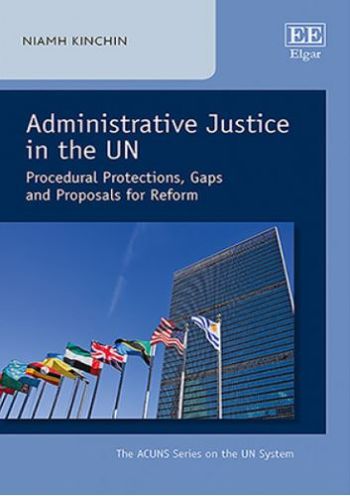 The UN’s capacity as an administrative decision-maker that affects the rights of individuals is a largely overlooked aspect of its role in international affairs. Administrative Justice in the UN explores the potential for a model of administrative justice that might act as a benchmark to which global decision-makers could develop procedural standards.

Niamh Kinchin adeptly explores accountability in the context of decision-making within the UN and examines whether its administrative decisions, affecting the rights and obligations of individuals and groups, contain sufficient procedural protections. It is suggested that ’global administrative justice’ requires two fundamental elements; administrative decisions made according to law, and to values communities accept as just, which are identified as rationality, fairness, transparency and participation. This model is applied to the UN’s Investigations Divisions of the Office of Internal Oversight Services, the UN High Commissioner for Refugees, the UN Security Council and the Internal Formal Justice System in order to measure procedural protections, identify gaps and make recommendations for reform.

This insightful book will be vital reading for academics and students of human rights, constitutional, public international, and administrative law. UN-affiliated personnel, as well as those involved in diplomatic departments, will find this book an engaging read.

Contents:
Introduction: ‘All is Forgiven’: Administrative Decision-Making Without Administrative Law
1. According to Law
2. According to Values the Community Accepts as Just
3. The Formal Internal Justice System of the UN
4. Office of Internal Oversight Services
5. UNHCR and Refugee Status Determination
6. The UN Security Council and Targeted Sanctions
Concluding Remarks
Bibliography
Index