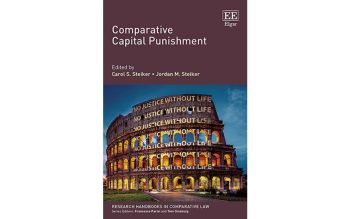 Comparative Capital Punishment offers a set of in-depth, critical and comparative contributions addressing death practices around the world. Despite the dramatic decline of the death penalty in the last half of the twentieth century, capital punishment remains in force in a substantial number of countries around the globe. This research handbook explores both the forces behind the stunning recent rejection of the death penalty, as well as the changing shape of capital practices where it is retained. The expert contributors address the social, political, economic, and cultural influences on both retention and abolition of the death penalty and consider the distinctive possibilities and pathways to worldwide abolition.

Scholars in the fields of law, sociology, political science and history, as well as human rights lawyers, abolitionists, law makers and judges who wish to remain up-to-date on changing death penalty practices will need Comparative Capital Punishment on their reading list.