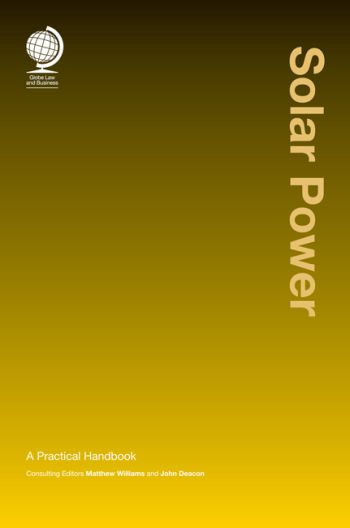 In recent years solar power has been on the march. Since the millennium global solar power generation capacity has grown from 1GW to 300GW and the growth curve is not linear; the last five years have seen a marked acceleration as technologies become more efficient, manufacturing prices come down and more countries adopt low carbon regulatory policies in which solar power can play a key part.

China alone saw an increase of installed solar power capacity of 33GW in 2016 and the China PV Industry Association predicts an additional 20-30GW of growth by the end of 2017.

The solar power market’s dynamism is matched by its complexity. As well as advances in technology and manufacturing processes, and variations in how the technology is deployed , the regulatory and fiscal policies adopted in individual countries can vary widely. However, some common themes have emerged and the potential for further growth in solar power can perhaps be better discerned now than when the market was in its infancy.

Solar Power: A Practical Handbook provides an in-depth analysis of various aspects of solar power including its commercial, technological and regulatory characteristics. It also provides a practical guide to developing, financing, acquiring and disposing of solar power projects.

Whilst being a technology which has been adopted on a global basis, each jurisdiction has its own dynamics, so the book considers the market-specific aspects of solar power in a number of key locations including China, Japan, the US and others. The book concludes with a look at the future of solar power; its place alongside distributed generation, smart grids and power storage and the technologies, opportunities and challenges for the future.

This book, featuring chapters by leading practitioners, will be of interest to lawyers, commercial managers, financiers and other consultants.