Research Handbook on Law and Courts 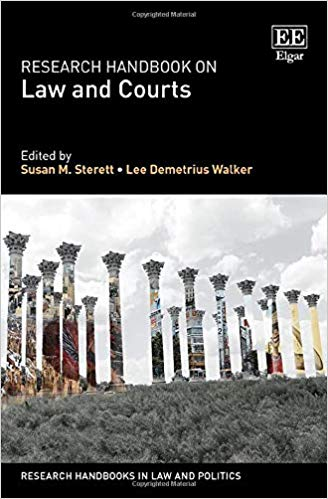 This comprehensive Research Handbook offers a multi-faceted analysis of the politics of law and courts and their role in governing.

The authors develop new theoretical, empirical and methodological approaches to the study of law and courts as institutions, while accounting for the increasing diversity and complexity of the jurisdictions they oversee.

The Research Handbook on Law and Courts features contributions from leading scholars in the United States, New Zealand, South Africa, Latin America and a number of European countries, enriching the scope of theoretical development in the field and identifying areas for future research.

Chapters address courts' centrality to governance by explaining how they participate in holding democratic administrations politically accountable, as well as by highlighting the political significance of court decisions concerning citizenship and inclusion. Chapters include studies of interactions between legal arguments, courts and other institutions that rely on law, as well as reflections on the physical and digital spaces of law.

This volume also examines demographic diversity in judging before concluding with reflections on how increasing digitization and computing power shape both court processes and sociolegal scholarship. Scholars concerned with courts and political accountability in complex, multi-layered governance will find this Research Handbook an invaluable resource.

Since courts and legal structures are increasingly significant around the world, the handbook will also be useful to other social scientists concerned with inclusion, representation, and accountability through law.