The End of Law: How Law's Claims Relate to Law's Aims 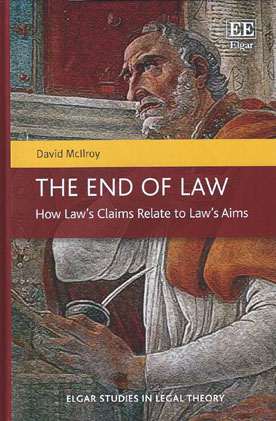 Augustine posed two questions that go to the heart of the nature of law. Firstly, what is the difference between a kingdom and a band of robbers? Secondly, is an unjust law a law at all? These two questions force us to consider whether law is simply a means of social control, distinguished from a band of robbers only by its size, or whether law is a social institution justified by its orientation towards justice.

The End of Law applies Augustine’s questions to modern legal philosophy as well as offering a critical theory of natural law that draws on Augustine’s ideas. McIlroy argues that such a critical natural law theory is: realistic but not cynical about law’s relationship to justice and to violence, can diagnose ways in which law becomes deformed and pathological, and indicates that law is a necessary but insufficient instrument for the pursuit of justice.

Positioning an examination of Augustine’s reflections on law in the context of his broader thought, McIlroy presents an alternative approach to natural law theory, drawing from critical theory, postmodern thought, and political theologies in conversation with Augustine.

This insightful book will be fascinating reading for law students and legal philosophers seeking to understand the perspective and commitments of natural law theory and the significance of Augustine. Readers with an interest in interdisciplinary approaches to legal theory will also find this book a stimulating read.

Contents:
1. What is the difference between a kingdom and a band of robbers?
2. What on earth are we talking about?
3. An end to war
4. The rule of law and the law of rules
5. The stable door
6. The good ending
7. Critical natural law
8. Justice: the terrible truth?
9. The agony of the law
10. The final judgment