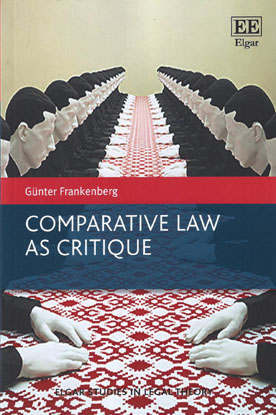 Presenting a critique of conventional methods in comparative law, this book argues that, for comparative law to qualify as a discipline, comparatists must reflect on how and why they make comparisons.

Gunter Frankenberg discusses not only methods and theories but also the ethical implications and the politics of comparative law in order to bring out the different dimensions of the discipline.

Comparative Law as Critique offers various approaches that turn on the academic discourse of comparative law, including analysis of a widespread spirit of innocence in terms of method, and critique of human rights narratives. It also analyses how courts negotiate differences between cases regarding Muslim veiling.

Gunter Frankenberg presents varied critical projects that discuss methods and theories, ethics and the politics of comparative law to bring out the different dimensions of the discipline.The incisive critiques and comparisons in this book will make essential reading for comparatists working in legal education and research as well as students of comparative law and scholars in comparative anthropology and social sciences.