Law, Economics and Cyberspace: The Effects of Cyberspace on the Ecomonic Analysis of Law 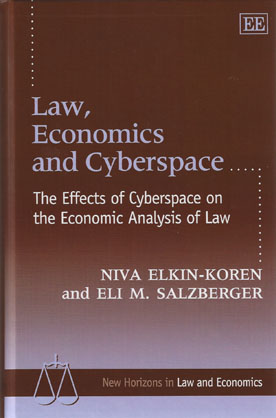 This book argues that the Internet revolution should exert a far more significant influence on economic thinking and on the perception of law.

The authors acknowledge that the economic analysis of law provides a potentially powerful framework for evaluating regulatory approaches to the Internet. However, they question the capacity of traditional law and economics models to define the scope of legal intervention, both in cyberspace and in other more traditional markets which have also been influenced by the recent technological revolution.

The book examines the conventional application of law and economics, and contends that the new reality of cyberspace transforms the basic theoretical tenets of this approach and requires fresh conceptual thinking. It challenges fundamental concepts such as the notion of work as linked to the workplace, the notion of community as linked to geographical space, the sources of law and their traditional connection with the state, the belief that proxies and representatives are indispensable for collective action and public decision-making processes, and the role of technology and its relationship with the law.

It covers the analysis of both economic and non-economic markets, and includes a thorough examination of legislation, case law and the academic literature relating to cyberspace.;The authors conclude that there is pressing need for re-evaluating the analytical tools used to study the information environment, and propose an innovative approach for the role of technology within the law and economics framework.

This book represents a groundbreaking attempt to critically analyze the suitability of traditional law and economics for the new digital environment. Scholars and students working in the field of law and economics, and lawyers interested in technology, intellectual property, cyberlaw and governance will find this a stimulating and thought-provoking volume.