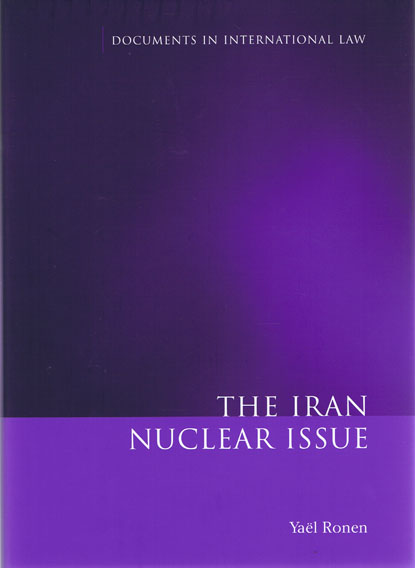 Controversy over the Iranian nuclear policy has been mounting in both legal and political circles since the early 2000s.

Most recently, the IAEA, tasked with verifying compliance of Member States with the NPT, has been expressing concern that Iran's nuclear efforts are directed not solely at peaceful uses but also at military purposes. In response, various States have tried, individually and collectively, to engage Iran in agreed frameworks of action that would include an Iranian self-imposed restraint regarding its nuclear development.

This volume documents the Iranian nuclear issue, tracing the evolution of international interest and concern with Iran's nuclear policy since the 1970s, when Iran began earnest efforts to acquire nuclear capabilities. Emphasis is nonetheless placed on events since 2002-2003, when it was established that Iran had concealed certain aspects of its nuclear activities from IAEA.

Alongside reports of the IAEA and Security Council documents, the volume covers diverse sources rather than relying solely on UN organs and agencies, international organisations or dedicated ad hoc bodies.

Occupation of Iraq Volume 2: The Official Documents of the Coalition Provisional Authority and the Iraqi Governing Council (eBook)
Edited by: Stefan Talmon
ISBN 9781782250180
Published February 2013
Hart Publishing
Out of print

Occupation of Iraq Volume 2: The Official Documents of the Coalition Provisional Authority and the Iraqi Governing Council
Edited by: Stefan Talmon
ISBN 9781841136424
Published February 2013
Hart Publishing
Out of print