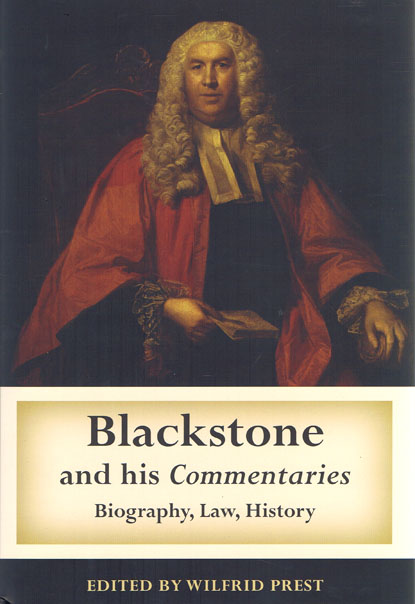 One of the most celebrated works in the Anglo-American legal tradition, William Blackstone's Commentaries on the Laws of England (1765-9) has recently begun to attract renewed interest from legal and other scholars. The Commentaries no longer dominate legal education as they once did, especially in North America during the century after their first publication. But they continue to be regularly cited in the judgments of superior courts of review on both sides of the Atlantic, and elsewhere throughout the common-law world.

They also provide constitutional, cultural, intellectual and legal historians with a remarkably comprehensive account of the role of law, lawyers and the courts in the imperial superpower that was England on the cusp of the industrial revolution.

The life and character of Blackstone himself, the nature and sources of his jurisprudence as expounded in the Commentaries, and the impact of his great book, both within and beyond his native shores, are the main themes of this collection.

Individual essays treat Blackstone's early architectural treatises and their relationship to the Commentaries; his idiosyncratic book collecting; his views of the role of judges, interpretation of statutes, the law of marriage, the status of wives, natural law, property law and the legalities of colonisation; and the varied reception of the Commentaries in America and continental Europe.

Blackstone's bibliography and iconography also receive attention. Combining the work of both eminent and emerging scholars, this interdisciplinary venture sheds welcome new light on a legal classic and its continued influence.