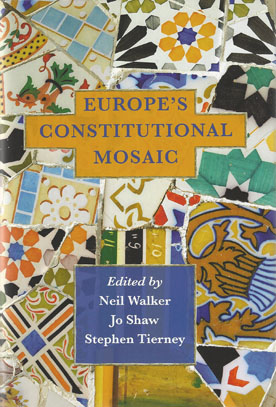 This book emerges from a seminar series held in Edinburgh Law School in the course of 2008-09. The seminars sought to explore the complex constitutional arrangements of the European space as an inter-connected mosaic.

There has been much recent debate concerning the constitutional future of Europe, focusing almost exclusively upon the EU in the context of the (failed) Constitutional Treaty of 2003-5 and subsequently, the Treaty of Lisbon.

The premise of the book is that this focus, while important, offers only a partial vision of the complex constitutional terrain of contemporary Europe. In addition it is essential to explore other threads of normative authority within and across states, embracing internal challenges to state-level constitutional regimes; the growing jurisprudential assertiveness of the Council of Europe regime (in particular through the ECHR); as well as Europe's ever thicker relations with broader international institutions, especially those of the United Nations.

Together these create increasingly dense networks of constitutional authority within the European space. This fluid and multi-dimensional dynamic is difficult to classify, and indeed may seem in many ways impenetrable, but that makes the academic challenge all the more important and pressing. Without this fuller picture it becomes impossible to understand the legal context of Europe today or the prospects of ongoing changes. The book brings together a range of experts in law, legal theory and political science from across Europe in order to address these complex issues.