This book is now Out of Print.
A new edition has been published, the details can be seen here:
Charity Accounts: A Practitioner’s Guide to the Charities SORP 5th ed (FRS102) isbn 9781784730840 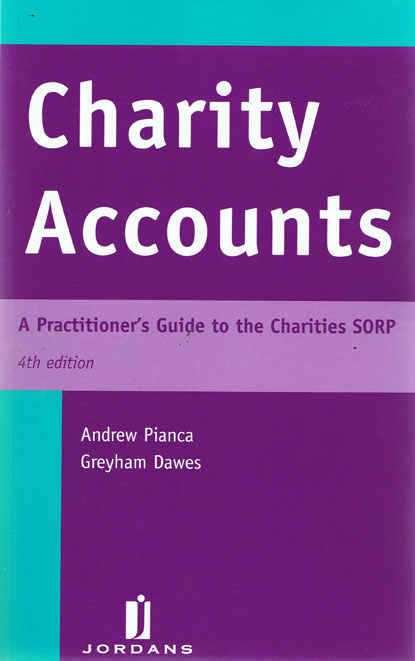 
Charity Accounts: A Practical Guide to the Charities SORP is the definitive professional guide to annual financial reporting, for both incorporated and unincorporated charities, under the current Statement of Recommended Practice, "Accounting and Reporting by Charities", and the related accounting legislations.

Charity Accounts: A Practical Guide to the Charities SORP is packed with practical information and advice on how to make the best of the regulatory regime for charities. It explains what SORP 2005 says, what it means in practice, how charities are affected by the greater demands and public expectations being imposed on the largest charities (especially through publication of the new "Summary Information Returns" of key data on their governance and performance) and how to ensure full compliance.

This new edition has been fully revised and updated to take account of the new SORP Information Sheets and regulatory changes, such as statutory group-accounting by non-company auditable parent charities and the Charities Act accounts-scrutiny regime for 'small' charitable companies. It also includes the phased implementation of the Charities Act 2006 and the Companies Act 2006.

This book provides invaluable technical guidance on how the financial reporting regulations relate to charities of different types and what needs to be done to comply and includes the full text of the SORP itself, the related regulations and a useful checklist of disclosure requirements plus fully worked examples of annual reports and accounts for different types of charity.

This new edition includes new and revised appendices for the CD-ROM accompanying the book including:

Charity Accounts: A Practical Guide to the Charities SORP is a 'must-have' for all Charity trustees, finance personnel and advising accountants.

Contents:
The Charities SORP - scope and compliance
Charity size-bands for statutory reporting
Fund - accounting
The trustees' annual report
The SORP and accounting standards
The statement of financial activities
The summary income and expenditure account (FRS3)
The treatment of tangible and other fixed assets for the charity's own use
Investment assets
The balance sheet and free reserves
The cashflow statement
Notes to the accounts
Accounting for "operating" activites
Branch – accounting versus consolidated accounts
Summarised accounts and the ‘SIR’
Accounts of the small non-company charity
Audit & Independent examination
Appendix – charities SORP 2005