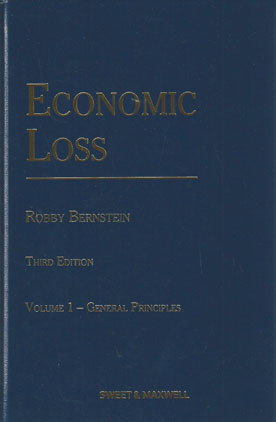 Wildy's Book of the Month: September 2013

This is a book about the common law tort of negligence with special reference to cases of pure economic loss. Robby Bernstein’s third edition of Economic Loss sets out, explains and comments on the principles applied by the courts in economic loss cases.

This work sets out, explains and comments on the complex principles applied by the Courts in economic loss cases. It is divided into ten themed chapters, starting with a general introduction describing the main elements of the liability.

It moves on to deal with the broad categories in which questions concerning economic loss and duties of care in tort arise, with an explanation of the case law in each category. The final chapter deals with claims for economic loss where there is a contractual connection between the parties.

Here you will find the answers to some vexed legal questions like:-