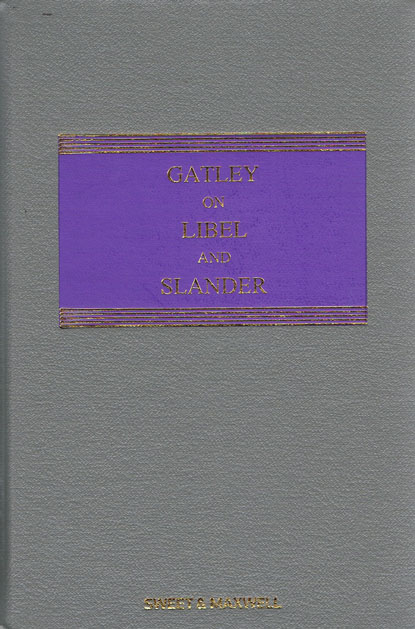 
Gatley is the leading text on libel and slander. This new edition will keep practitioners up to date with the latest developments in the law of defamation, both substantive and procedural. It analyses the relevant case law, and guides the reader through practice and procedure in detail.

The new 11th edition incorporates the latest case law, explains new procedures and tracks the developing law in areas such as press freedom to report on matters of public interest.

What’s new for the 11th edition Gatley on Libel and Slander, though based on English law, continues to trace developments in other common law jurisdictions. Among many developments noted are the uniform Acts passed by the Australian states in 2005 and 2006. The Irish Defamation Bill is noted and may be passed before publication.

Contents:
Part One: The Defamatory Statement
Introduction
Defamatory Imputations
The Form and Meaning of the Defamatory Statement
Slanders Actionable Per Se
Slanders Actionable Only on Proof of Special Damage
Publication
Identity of the Person Defamed
Parties: Who May Sue or Be Sued
Remedies
Part Two: Defences
Defences: General
Justification (Truth)
Fair Comment
Absolute Privilege
Qualified Privilege at Common Law Part I
Qualified Privilege at Common Law Part II
Qualified Privilege: Statute
Malice and Qualified Privilege
Rehabilitation of Offenders Act 1974
Other Defences
Part Three: Other Causes of Action and related Matters
Scope of this Part
Malicious Falsehood
Misuse of Private Information
Other Causes of Action Arising from Statements
Criminal Libel
The European Convention on Human Rights and Reputation
Part Four: The Action
The Initial Stages
Interim Injunctions
Particulars of Claim
Defence
Reply and Defence to Counterclaim
Apology, Offer of Amends and Compromise
Pre-trial Applications
Interlocutory Matters
The Trial: The Claimant’s Case
The Trial: The Defendant’s Case
The Trial: Functions of Judge and Jury
The Trial: The Final Stages
Appeal
Appendix 1: Forms and Precedents
A Steps up to and including issue of proceedings
B Statements of case
C Settlement of action
Appendix 2: Statutes
Appendix 3: Damages Awards